Study 9: Decreased war intensity in 5 areas around the world through Yogic Flying

1400 volunteers trained in the TM sidhi programme and in Yogic Flying offered to participate in a global experiment, the “World Peace Project” that took place from early October to late December 1978. The TM organisation financed the entire project from its own funds and donor funds. The Yogic Flyers traveled to different problem areas around the world where war already existed, or where the situation was dangerously explosive. They stayed in the relevant areas or, where this was not possible for reasons of security, as close to the areas as possible:

The description of the effects of this experiment is full of miraculous events, like how there were daily bombings in Zimbabwe, but from the day the Yogic Flyers arrived the situation calmed, and in the entire country the number of deaths a day dropped by 80%, from 16 to 3, and how the government requested the Yogic Flyers to extend their stay as, whatever it was they were doing, it worked, and how the day after they finally left a bomb attack occurred and the level of violence returned to the level it was at prior to the experiment.

However, to shed these events in a more objective light, researchers worked closely with the Conflict and Peace Data Bank (COPDAB), then the world’s largest database around news events. They collected news from all over the world, national and international media (415.000 events over the previous 30 years) and would score these depending on whether it was positive or negative news, divided into 3 large groups: 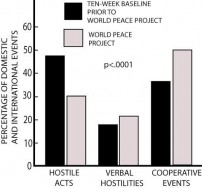 These numbers showed that, during the 10 weeks of the World Peace Project in comparison to the previous 10 weeks, the number of “hostile acts” across the 5 areas dropped by 30%, while the number of “cooperative events” increased by 30% (p<.0001). Later analysis showed that this had nothing to do with the time of year. During the previous time years no differences were noticeable in the same period.Ref.Scientific Research on Maharishi’s Transcendental Meditation, Collected Papers vol. 4 no. 322 pp. 2532-2548