This study was the most public study to date. A group of scientists announced that they would, through a large group of 4000 Yogic Flyers, decrease serious crimes (murder, rape and harassment) in Washington DC by 20% during the summer of 1994. It was also predicted that the quality of life would improve, measured by a previously specified index, and that the government would start functioning more efficiently, objectively measured through an improvement in the “approval rate” of President Clinton (whose public support was at an all-time low immediately before the study, with no signs of improvement). This prediction was faxed to 1900 fax numbers, including scientists, all senators, other top politicians and 375 different media outlets. The prediction made it on to television and was reported by a good number of media outlets, including CNN, Associated Press, the Washington Post, and the Washington Times.

At that time Washington was the most violent capital city in the world. From 1986 to 1992 the crime rate increased by 77% (11% annually), despite a growing budget to fight crime (1 billion USD annually for crime in Washington DC alone). When the head of police heard this prediction, he wasn’t just a little bit skeptical. He even appeared on television, and declared:

The experiment took place in the summer, and “20 inches of snow” was therefore his way of saying: “Impossible”.

To rule out any doubt about the full objectivity of this study, a 24 member committee was put together, comprising scientists in the fields of crime and sociology, politicians, and members of the Washington Police Force. All members had one thing in common, they had no connection to the Transcendental Meditation organisation.

This committee decided through discussion what statistic information was to be used to predict crime, and to thereby see whether the crime rate during the time of the experiment deviated from the predicted crime. Their statistic model was tested against the actual numbers of the previous 5 years and appeared to very accurately predict crime. (The most important variable turned out to be crime. The higher the temperature, the more crimes). 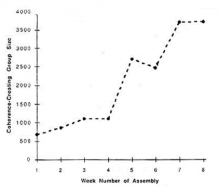 The experiment started in early June, but as with many other previous experiment the Yogic Flyers were all volunteers, having to take time off work and traveling on their own cost to Washington DC. The result was that the number of Yogic Flyers gradually increased over the 8 weeks of the experiment, until it reached 4000 in the final 2 weeks. 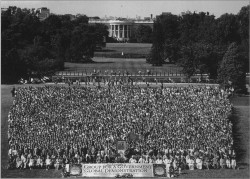 To celebrate their assembly, they decided to take a small group photo in front of the white house (click on the picture to enlarge it).

This gradual increase made the experiment that much more interesting than the researchers had originally thought. If the heavy crime rate was to follow this curve (in the opposite direction, less crimes for more Yogic Flyers), than the correlation would be much stronger. 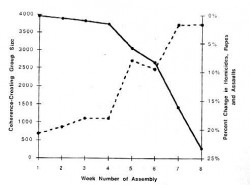 This turned out to be exactly the case. At the time of the maximum number of Yogic Flyers, the number of heavy crimes had decreased by 23%. The correlation was so strong, and the decrease so significant, that the probability of chance was 1 in 500 million (p=.000000002). Further analysis showed that if the group of Yogic Flyers could have stayed longer, crime would have dropped by 48%.

The other predictions came true too. The Quality of Life index showed a dramatic improvement, with improvement in all factors included in the index (psychiatric emergency assistance requests p=.009, media attention for Clinton p=.01, Complaints to the police p=.01, Trauma incidents p=.01, and fatal accidents p=.045). 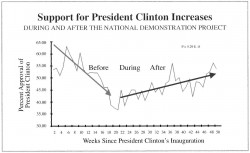 The Washington Post was unable to explain why both the press and the public were suddenly a lot more positive about the president. On 18 July 1994, in the middle of the experiment, they wrote:

“The Clinton Administration appears to have revived…Washington has relaxed. But such a swift reversal of political fortune is not easy to account for. [We] may logically wonder whether Clinton really turned things around or if something else is going on…almost mysteriously and almost overnight, in the face of government distress, the press seems to be transformed…Bill Clinton, after all, is still Bill Clinton…[He] hasn’t changed – and neither has the press”

This study was finally accepted for publication in one of the most prestigious scientific journals in the field of sociology, Social Indicators Research, although it took them three years to look at all aspects of the research prior to publication. The Washington DC police force co-signed the study as co-authors.

The cost to assemble 4000 Yogic Flyers for this 2 month experiment was $8 million, fully paid by the Transcendental Meditation organisation, several donors and Yogic Flyers. The normal police cost for this same period was $166 million, without succeeding to lower crime.Ref.Social Indicators Research (1999, vol. 47, no. 2)