In 1988 Merseyside, a city of 1.5 million, was the most criminal metropolis in England. So when a group of Yogic Flyers in March of that year predicted on television that they were going to decrease crime significantly, not a lot of people took them serious. A few hundred Yogic Flyers had formed a small community in the town of Skelmersdale, nearby Merseyside. The intention was to live together and to practice TM, TM Sidhi and Yogic Flying together.

In March 1988 they had built a hall allowing them to do this, and the group had grown to 120 regular Yogic Flyers, theoretically large enough to create an influence for all of Merseyside. All these Yogic Flyers were normal everyday people, with their own jobs and households, but twice a day, before and after work, they would come together to create the influence, for themselves and their environment.

The graph of the number of crimes over the next 5 years looks as follows. 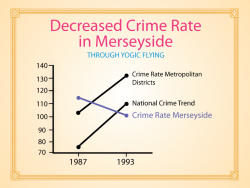 In contrast to the increasing crime trends in both the large metropolis cities in England and in general, the number of crimes in Merseyside decreased significantly (p<.00006). After 5 years Mersey had the lowest crime rate in all of England. Crime had decreased by 45% as compared to its own trends, and by 60% as compared to national trends. Merseyside was the only metropolis where crime decreased.

Other factors also started improving. The number of suicides decreased to the lowest overall in all of England, and other violent or accidental deaths by 1992 was the second lowest of all metropolis districts. In 1985, only 40% of all visitors went to Merseyside for pleasure, by 1990 this had increased to 80%.

The economy in Merseyside also drastically improved. Whereas the metropolis previously had only known decrease, in the early 1990s it became the model for economic advancement. In 1995 an article was published in a prominent newspaper, the Daily Mail, with the title: “Merseyside is my heaven on earth”.

Researchers calculated that the Yogic Flyers had prevented a total of 255.000 crimes. The average cost per crime was estimated at £5000 (not taking into account human suffering), which therefore implied a total saving for the government of £1.250.000.000.

For every hour that a Yogic Flyer did his thing, this implied savings for the local government of £3000. Even if the Yogic Flyers were paid a respectable salary of £30 an hour, the total cost would still be 99% lower than the current cost of tackling crime, while clearly being a lot more efficient.

This is an example of what is possible in terms of costs savings for the government, but given the exponential growth of the effect of the number of Yogic Flyers, not the best example. This was only a group of 120 Yogic Flyers. A group 10 times as big could influence 100 times more people, as some studies have shown. This means that the cost per created influence is 10 times lower.Ref.Journal of Psychology, Crime & Law (1996, vol. 2, pp. 165-174)Ref.Scientific Research on Maharishi’s Transcendental Meditation, Collected Papers vol 6, 488, pp 4079-4085